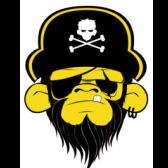 Bear Flew up into the sky and is now gone.