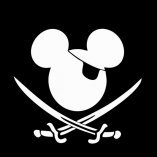 No Armored Docks on Enemy Islands