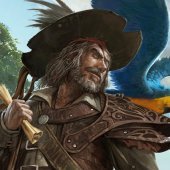 unforgeable document Notes should have cafter information or a signature function.

By Davy Jones [EU|DE], January 5 in Feedback and Suggestions